We love going out for family meals but we always seem to end up at the same places and eat exactly the same food each time we go out. One option certainly wouldn’t have been going to Prezzo, purely because we would not have thought of it.

Lola and I went along to Prezzo in Maidstone with my sister Chloe to try out and review one of the new La Famiglia Sharing Bowl. I decided to book a table online before we went as I didn’t know how busy they usually are. It was quick and easy to do and only took me about 2 minutes just to fill in my details along with date/time and needing a highchair. I then also promptly received an e-mail confirmation with all the details. 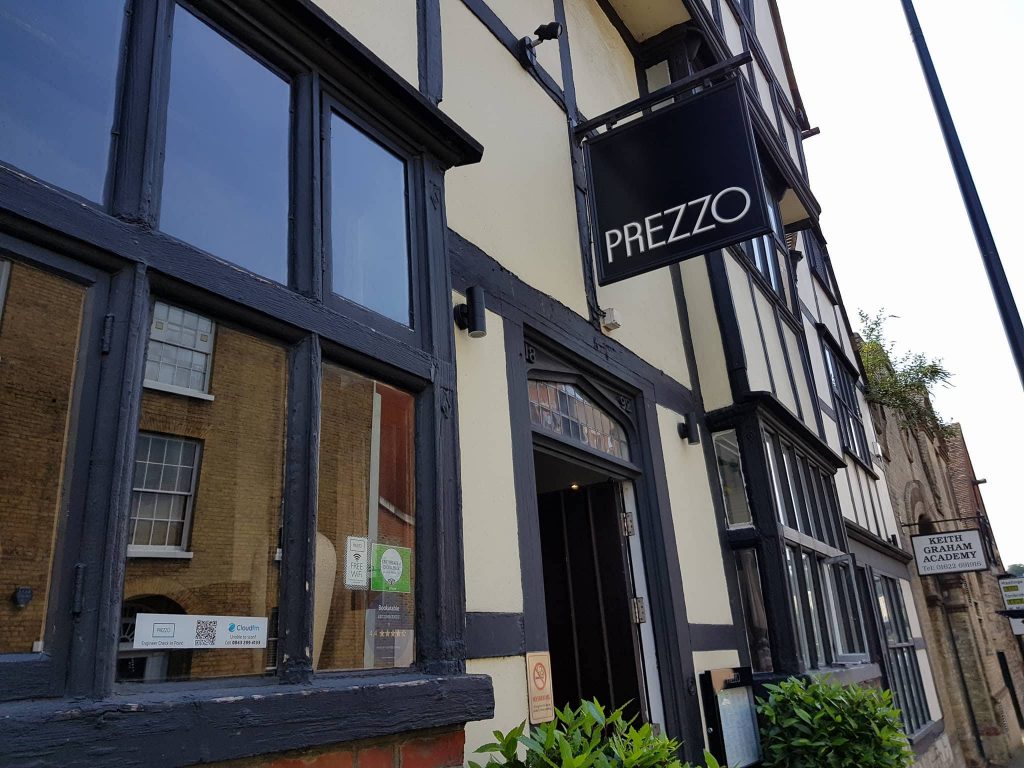 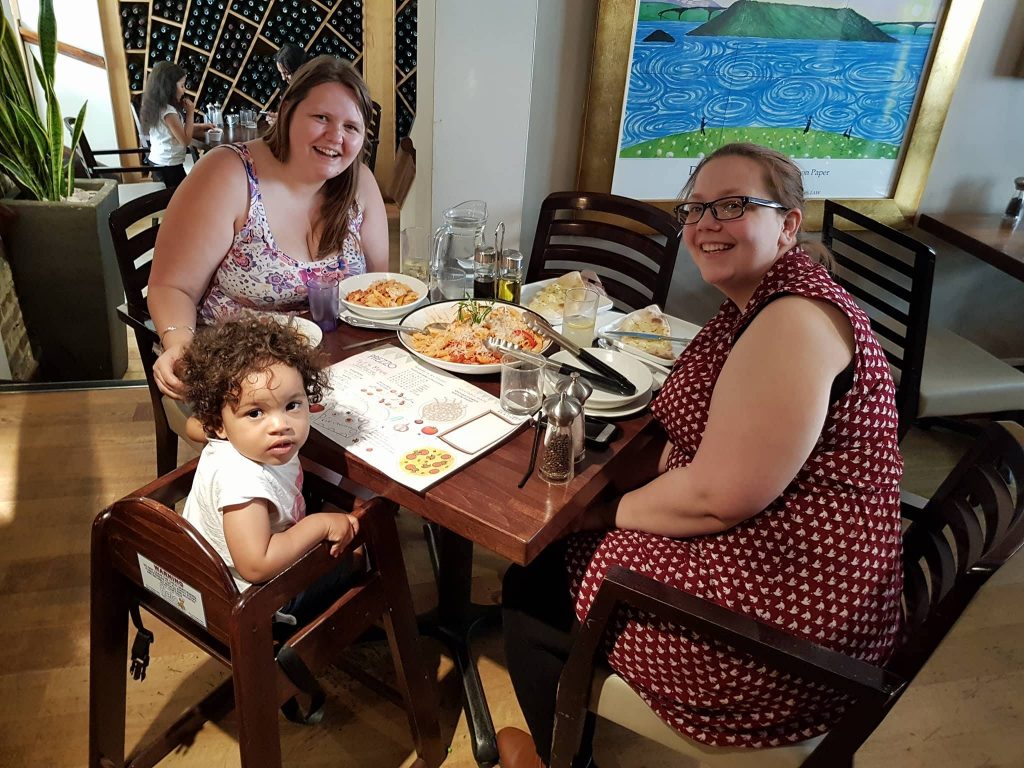 For our main course we order the La Famiglia Sharing Bowl, there are 4 different options that you can order. Spaghetti Bolognaise, Penne Arrabiata, Spaghetti Carbonara and the dish that we ordered Penne Alla Rusticana. We also ordered 2 Garlic Bread with Cheese. I was a little concerned when we ordered that it would only just be enough. The menu says that it serves 4 but usually I expect it to serve less as we have big appetites.

Wow! We were certainly in for a shock! Lola’s eyes lit up as soon as she saw the bowl!! It was huge! Certainly more than enough for all of us! 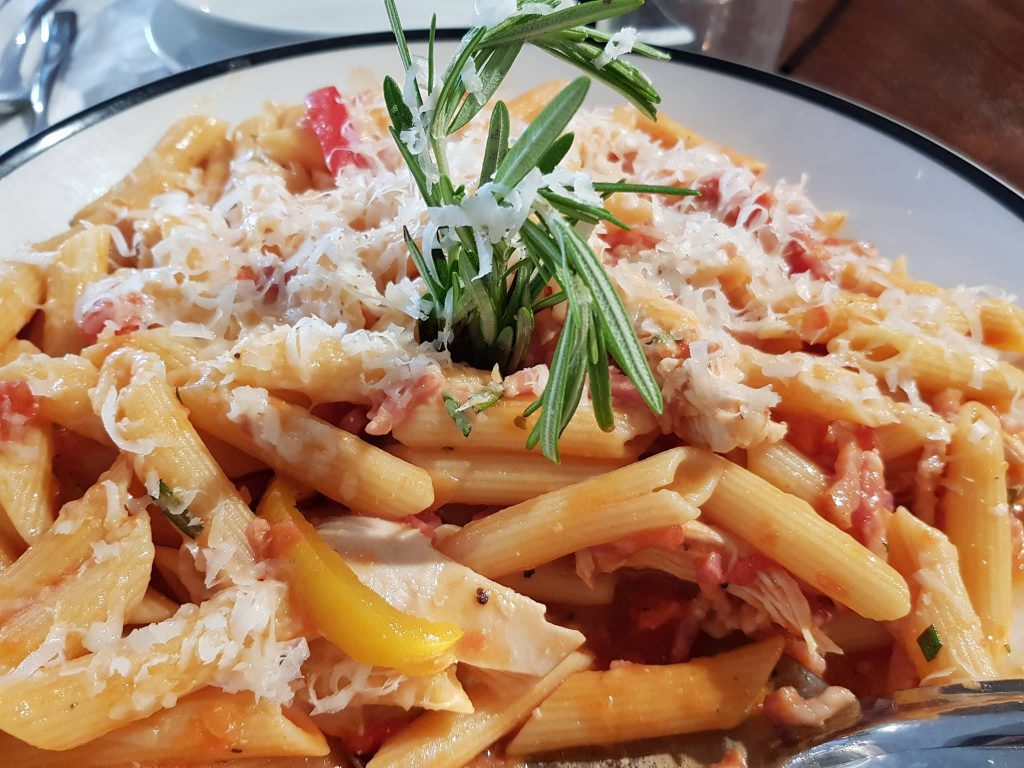 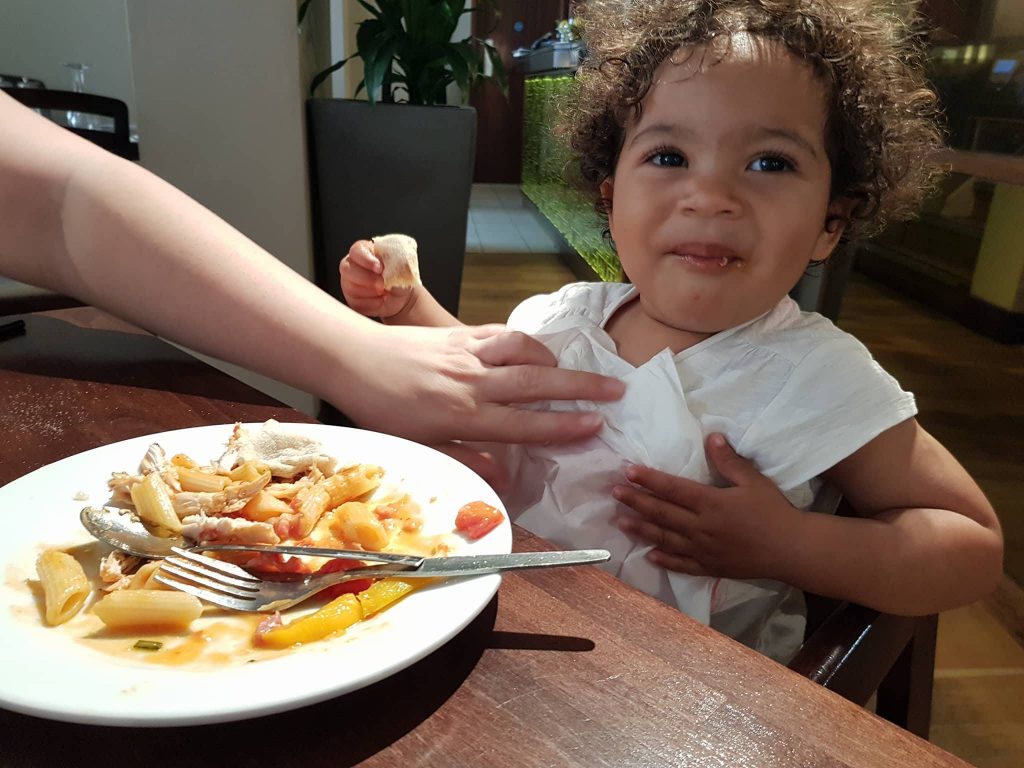 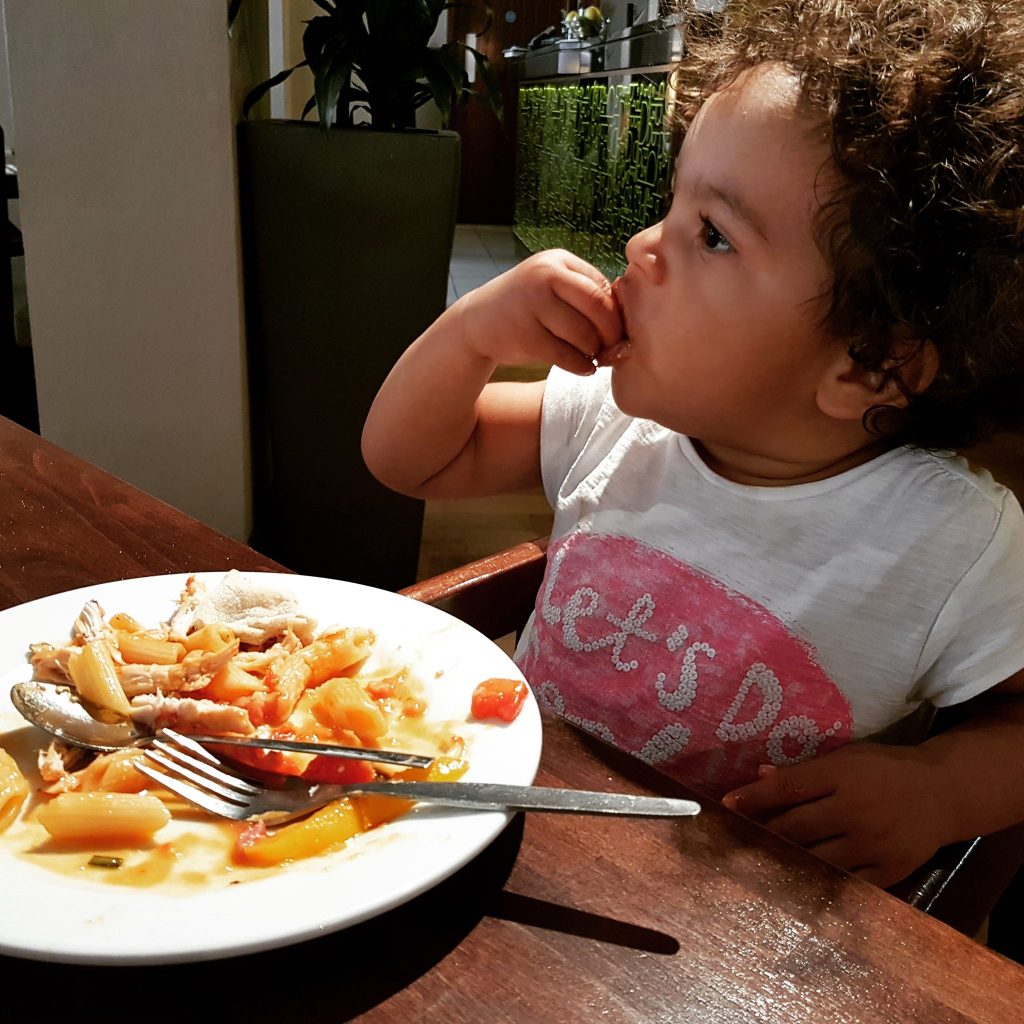 I was really impressed that they had small child size cutlery. I’m awful at remembering Lola’s cutlery so it’s brilliant for children when they have parents like me that always forget! With our meal we had a jug of water so that we could keep topping up Lola’s drink and they also provided a plastic cup. It’s amazing how many other restaurants don’t think about these small details.

We all had 2 huge plates of our Penne Alla Rusticana but there was still so much left. The waitress was absolutely lovely and could see we were struggling and had finished so offered to put it in a takeaway box so that we could take it home! There was also a whole Garlic Bread left as well.

Our meal was then finished with Ice Cream! We all had different ice cream, Lola had Vanilla, I had Chocolate and my sister had a Sorbet. We actually shared all 3 so had a bit of each! They were all certainly delicious and certainly a great way to finish our meal. 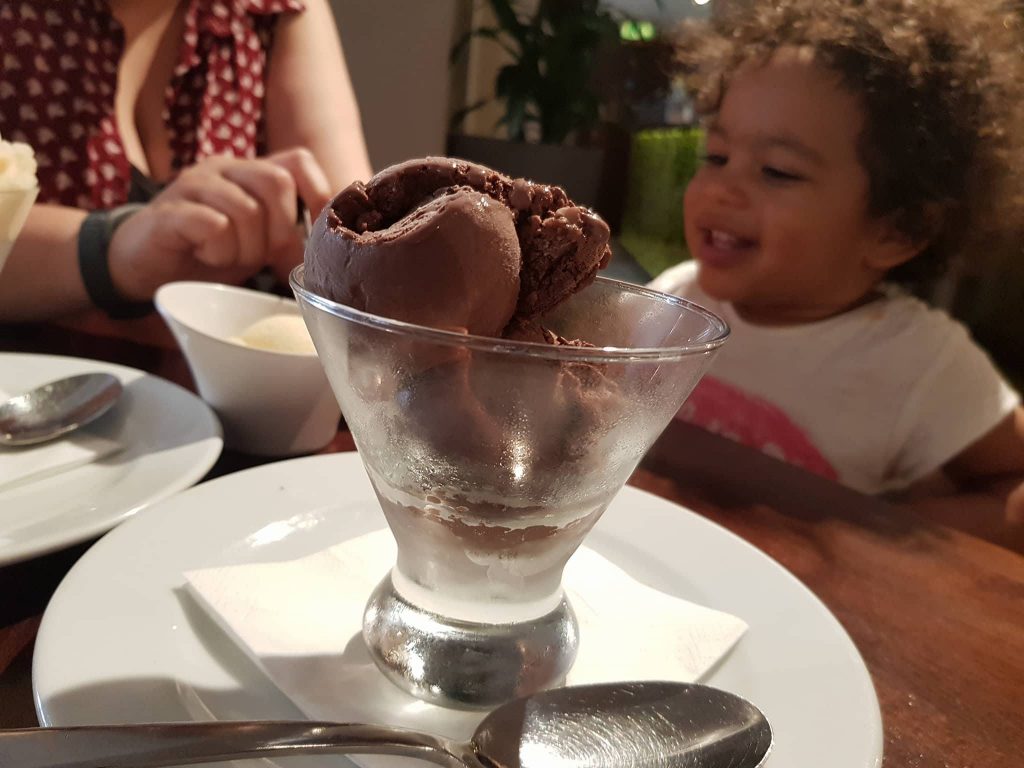 The service we received whilst at Prezzo was fantastic. I was a little bit worried that as they knew I was reviewing that we would be treated differently but this certainly wasn’t the case. We had two different waitresses whilst we were there and they were both extremely attentive to every table.

The only thing that let was a little disappointing was that we weren’t made aware of an easy accessible entrance. We had Lola in the buggy and had to lift her up 3 quite high steps. The staff did watch us entering and we weren’t made aware of another entrance. On leaving they did offer help to get down the steps but we were already half out by then. The only reason I found out they had another entrance was that I saw it on the website once we left. I was also slightly worried about leaving our buggy in a reception area. It was next to the entrance so could have easily been seen and taken especially as we had been shopping first so it had a lot of shopping on..

We will certainly be returning in the future! Especially as since booking online I now get frequent e-mail offers and there really are some fantastic deals! It was also so lovely to spend some time as a family with my sister as I know Lola loves spending time with her. 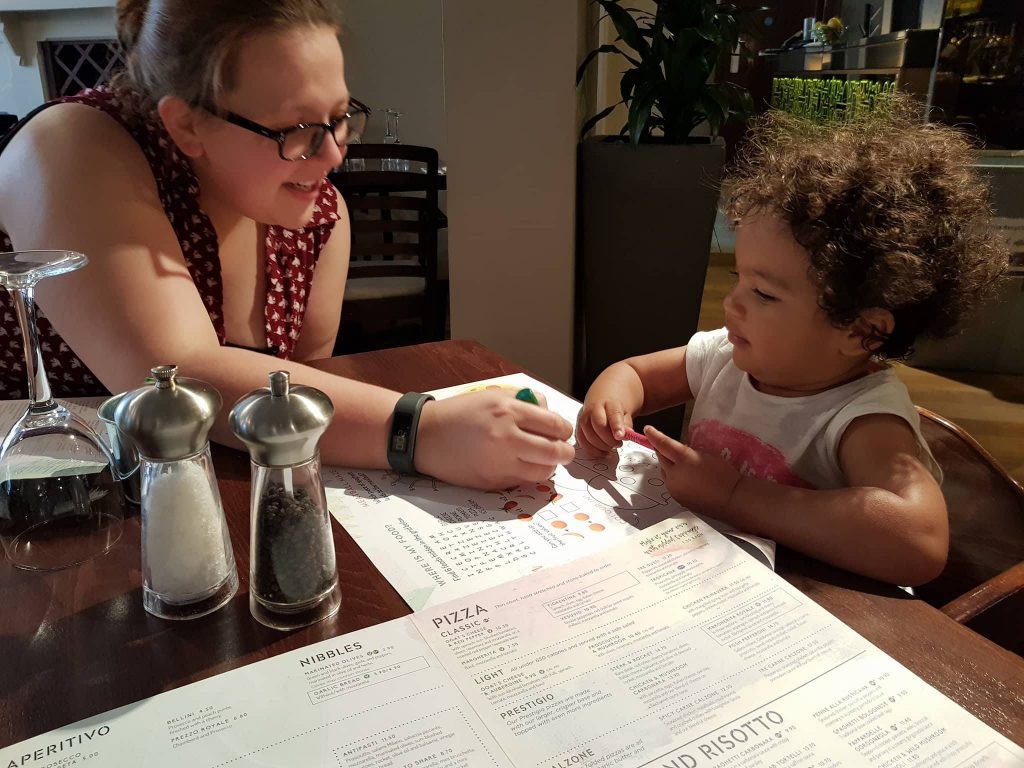 This post is an entry for the BritMums #PrezzoLaFamiglia Challenge, sponsored by Prezzo. https://www.prezzorestaurants.co.uk/LaFamiglia/

*Disclosure – We were provided this meal in exchange for a review. All opinions are my own*

One thought on “Prezzo La Famiglia”