The First Hippo on the Moon

Don’t worry i’m not going completely crazy to start writing about a Hippo on the Moon! It’s actually David Walliams that has been writing about them! We were invited along this afternoon to the Orchard Theatre to see the stage production of The First Hippo On The Moon. The book written by David Walliams, was released in July 2015 and then turned into a stage show in December. It is performed by the theatre company Les Petits, who are well known for a number of other productions. 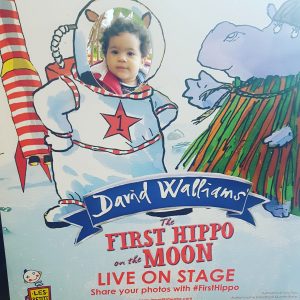 Well Lola absolutely loved every second of it! The story line is all about 2 Hippos competing to become the First Hippo on the Moon. The 2 Hippos Sheila and Hercules Waldorf – Franklin III are complete opposites, the latter being extremely wealthy in the Hippo world! Sheila believes that she has “nothing” but friendships and loyalty mean so much more than what Hercules has.

Throughout there was plenty of music and extremely catchy songs. Each time a song started Lola would be bouncing and swaying along. She loved all the interaction between the performers and the audience. Lola loves watching other children so watching the other children being excited is something that Lola loves!

The show is certainly David Walliams humour! There is a lot of toilet humour but all the children in the audience found this hilarious! I certainly thoroughly enjoyed the show and Lola really enjoyed it! The Les Petits Theatre Company are absolutely fantastic! The show lasts an hour so is certainly a perfect length for children.

How to see the show

The First Hippo On The Moon is showing at The Orchard Theatre Dartford until Wednesday 1st February 2017 with tickets still available. There are two different show times each day. It is then touring all over the rest of the UK until July!

*Disclaimer – We were invited along to watch the show in exchange for an honest review. All opinions are my own and have not been influenced in any way.