I really don’t want to be writing this! One more month and Lola will be one! That is so scary! Lola turned 11 months on Thursday. She now weighs 24lb and in length she is 76cm (This is the first time that her length has ever been measured) She is still in mostly 12-18 month clothing and in size 5 nappies. It has been quite scary recently as there are a number of her outfits that are 2-3 years but those items of clothing are from 2 known shops that the sizes come up extremely small.

Lola does not stop walking EVERYWHERE. It is a complete nightmare sometimes! She does not want to ever be in her buggy or the carrier and just wants to walk! We have just bought her some wellies just to cover her feet a bit when we’re at the park or anywhere muddy! She is still learning to walk in them and is quite quickly back in her shoes whenever we are out! We went to Bluewater last week and she insisted on walking the entire time!

Lola still only has 5 teeth so this hasn’t changed at all. However, she has been teething as she has been constantly dribbling and quite grouchy at times! We’ve had a few sleepless nights the past few nights. I really don’t think it will be long and there will be more coming through. Brushing her teeth has been a complete nightmare however tonight we have started using a baby electric toothbrush and she loves it! Let’s hope it lasts! 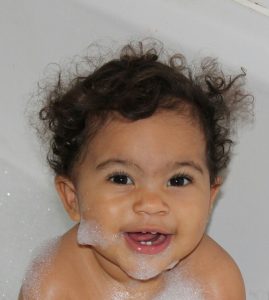 Unfortuantely I’ve been quite ill this month so the few exciting things we had planned we had to cancel! I had a stomach bug, then mastitis then ended up having to go to hospital with a flare up of gallstones again!

I took Lola to the cinema for the first time which was extremely exciting! We went to Bluewater as they had Baby Pictures on so it meant that it is much cheaper, the lights are turned up a little bit (not much though) and the sound is slightly quieter. Lola absolutely loved it!

We saw Disney’s Moana and she was constantly singing (Lola style) clapping and dancing! For her first time to the cinema I can’t think of a better film to see! Lola sat on her own seat for part of it but she wasn’t quite heavy enough so I put her shoes on and put her drink on the chair to weigh it down! If she moved the slightest bit forward the seat would swallow her up! She got a little bit grouchy towards the end but that’s because she was so tired and wanted to be walking about. She sat munching her apple throughout the film but as she was getting tired she wanted me to feed her. Thankfully we were in the back row to ourselves as she expected to be fed sideways so she could still see the cinema screen! 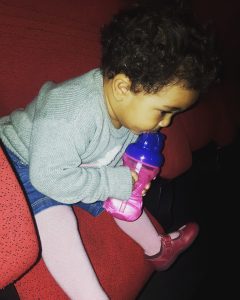 Another first was that we have been preparing for Lola’s first Christmas! Lola has met Father Christmas twice this month! We were asked to review Intu Lakeside and then the following week we visited Brookside Garden Centre. Wow! How amazing and magical is Brookside Grotto! Lola however finds it a bit weird us just passing her to a man with a big beard in a funny suit!

Another exciting event this month was on Wednesday she had her photoshoot with Annabel Karmel! Lola was selected as a finalist to be the new cover star of Annabel’s book! Regardless of whether Lola wins the competition she will certainly be featured throughout the book! 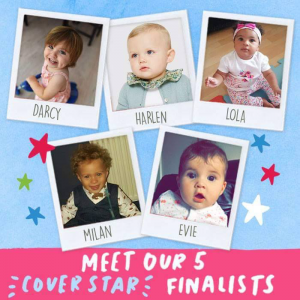 Look out over the next month for posts with on the preparation for Lola’s Christening and Birthday celebrations!!!