Ice Cream really is one of my weak points!! I love Ice Cream and no matter what weather I will still eat it!

There is an Ice Cream van that goes to my Mum’s (well to her village not just her house!!) and nothing beats an Ice Cream! Nothing will ever beat an Oyster covered in Bubblegum sauce from Adam’s Ice Cream Van!! (Who knew I would end up blogging about the Ice Cream Man!)

Who can resist a Ben and Jerry’s Ice Cream! I love the classic flavours Cookie Dough or Chocolate Fudge Brownie. When I first moved in I always used to have Ben and Jerry’s in the freezer! Even at my Mum’s I always used to make sure there was at least a tub or two in her freezer! It does have to sit on the side though for 5 minutes before eating it so it melts a little bit!

If we are out and about and getting an Ice Cream then I immediately go for Bubblegum or Cherry. If they haven’t got either then it will be Chocolate! I expect most Ice Cream places to have bubblegum sauce though to put on!! I am also rather partial to a Maxibon! When I went to Spain a few years ago I had at least two a day!! It’s just a shame that although you can buy them here they are no where near as big!! 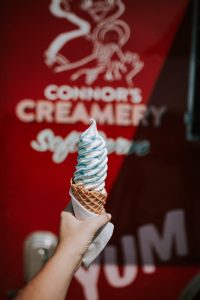 All this post has made me do is want Ice Cream and it’s typical we haven’t got any in the freezer!!