It seems forever ago that I was in Education! I graduated from University in 2012 I honestly can’t believe that was 5 years ago!

For Primary School I went to Capel Primary School which was our local village school. Living in a village absolutely everybody knew everybody! I can still remember all my teachers names from when I was there. When I started in reception I spent the first term in reception and then a small number of us were moved up to Year 1 as there were so many new starters. It meant that I then spent 2 years in Year 6!

Until Year 10 I went to Hillview School for Girls and I then transferred to Bennett Memorial. I thoroughly enjoyed Bennett, I moved half way through GCSE’s so it was challenging but it was so worth! Bennett was a totally different school to Hillview and I certainly made some of my best friends at Bennett that i’m still really close to. I left year 11 with 1 A, 3 B’s, 3 C’s and 2 D’s for GCSE’s so I was so proud that I had managed to pass so many even with the change of school. I started 6th Form at Bennett but 6th Form wasn’t quite right for me so I dropped out half way through the year and carried on working full time.

My Mum really wanted me to go to college and although it was something I had looked at it wasn’t something I was totally interested in. She arranged for me to go and visit Canterbury College to study music. I was concerned about the travel but it was worth looking at. Once I went to look at it I instantly knew it was the right decision to go. The modules were a lot more flexible and really interesting and I would learn so many new skills.

Unfortunately until then I had always played the piano classically, at college it was more about modern music, improvising and playing by ear. None of those were really my strong skills. My 1 A in GCSE’s was in music as I was so devoted to music and that was through composing, playing and classical theory skills. Not very much of that was covered at College. I still managed to finish college with a Distinction, Merit Merit so it was still a very good pass but through my time at college I certainly lost a lot of confidence playing the piano.

I knew I was certainly going to university and there was no two ways about it I would be going to Canterbury. I loved commuting to college that I couldn’t see doing anything different for University. It also meant that I wouldn’t have to give up my jobs (I was working two at the time). I applied to study Music Education but unfortunately there wasn’t enough interest in the course. Instead I was put onto a combined honours course studying Music and Education Studies. I know it doesn’t sound very much different but it was, I still thoroughly enjoyed it.

As I had lost so much confidence at College in playing the piano I had a big decision to make. I had to choose out of going down a practical pathway or theory pathway. Practical would have involved a lot of practical sessions and being graded on my playing. Or theory pathway I would be learning about how music was put together and everything theory based.

I decided to go down the theory pathway and I know that was certainly the right choice for me! I ended up graduating from Canterbury in 2012 with a 2.2. 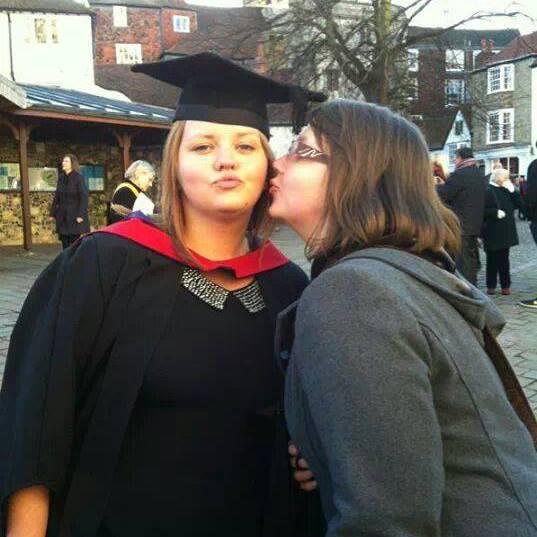 On my graduation day with my sister!

I have been offered on a couple of occasions to do NVQ level 5 in Health and Social Care but then when it comes down to it the Government won’t fund me as I already have a degree. Which is frustrating because there had been loop holes and I know others with degrees/masters that have studied them!