I feel that I actually made several confessions back at the beginning of Blogtober! It now means I have had to think of 3 further confessions!

Firstly, Some people will know this but many won’t! I am extremely lazy. I used to utterly hate walking! Before having Lola I used to even drive to my local Asda Living and The Range. This sounds ok doesn’t it? Well they are pretty much opposite my flat. Since having Lola this has massively changed though! I now walk into Maidstone town quite a bit and go to our local parks so now do a lot more walking!

Secondly, everybody I used to work with knows this but not many other people. At work I was once told that if you cut a carrot in half the amount of rings it has is how many months it will be ok to eat. So what did I do? I cut a carrot in half and kept it in a plastic container for 3 months in my draw! Other staff would come and ask for carrot updates! Including some of the big management! On the 3 month anniversary sadly my carrot went in the bin (it was disgusting by then!) but the Director of Operations had knitted me a carrot for me to keep forever more! It was here that told me about the rings in the first place!!! 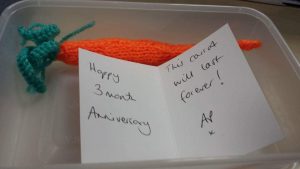 Finally, as you can tell from my previous confession I am quite gullible. I will be told things and believe them! When I was younger we went to the Isle of Wight. My Dad and Grandad told my Brother, Sister and I that they spoke differently to us. We proceeded to get of the ferry and arrived at our first destination where we couldn’t wait to speak to our first person. They looked at us like utter weirdos. Apparently you don’t have to talk Veeeeeeeery Slooooooowly on the Isle of Wight like we were told!!!